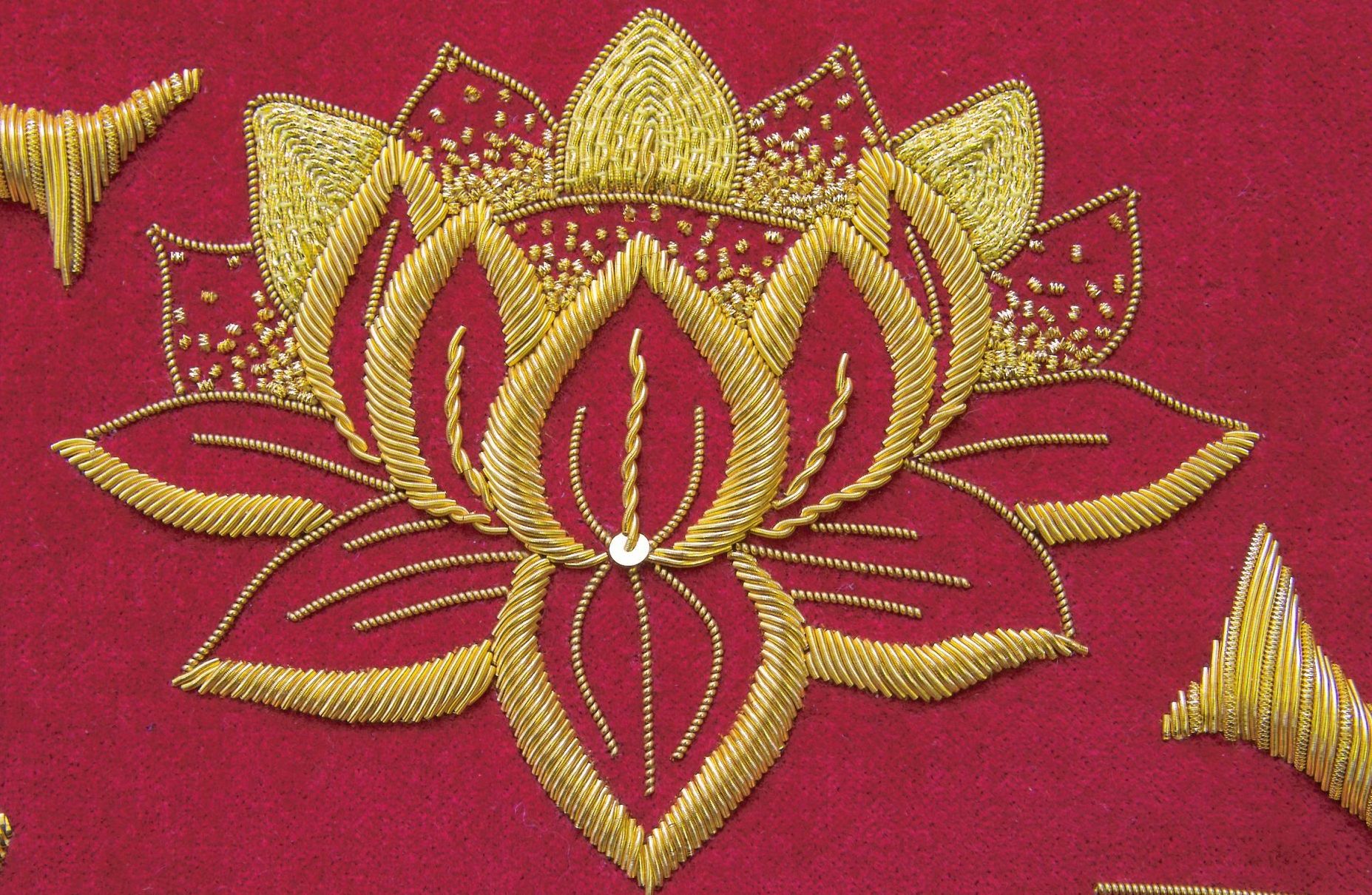 Goldwork has a rich and vibrant history which reflects the way that gold has always been used to demonstrate wealth, power and status.

Gold thread originally came from Asia where it can be seen on the lavishly adorned garments of the Japanese and Chinese emperors, but after the secrets of silk production became known outside of Asia, gold thread became more widely available and travelled from the East, through Beruit, India and Persia, finally landing in Europe where it’s earliest uses can be seen in the Churches of Italy, Greece, Turkey and Cyprus on vestments and Altar frontals alike. One of the main reasons goldwork was used so prevalently across the church was to celebrate the majesty of God.

The early gold threads were made by covering a sliver wire with a gold coating. This thread was then pulled out to various thicknesses and from there it could be hammered flat and wrapped around a core thread and couched down, or spun and pulled through various sized holes which gradually got smaller and smaller, eventually becoming fine enough to be twisted into purls and bullions. The wide variety of gold threads that were able to be created meant that when they were stitched down, interesting textures and effects could be created that reflected light in various ways.

The earliest known surviving piece of English gold thread embroidery is the tenth-century maniple and stole of St.Cuthbert which was originally buried with him, but is now preserved in Durham Cathedral. Today we tend to use goldwork embroidery to stitch and embellish the main motifs of a design but in these early examples the background has been couched in very fine gold thread, allowing the fine delicate embroidery to come to the foreground.

The Middle Ages saw the greatest period of Church embroidery and much of it was goldwork which became known as Opus Anglicanum or English work. Whole backgrounds of embroidered vestments were stitched in underside couching, a durable technique which allowed what was normally a very stiff form of embroidery to become much more flexible, thus allowing greater movement for the wearer. So skilfully executed was this technique, that it became highly sought after, with orders coming in from across Europe, including the Vatican. You can see a great tutorial HERE on how to work underside couching from my friend and colleague Sarah Homfray.

In the fifteenth-century a new technique was developed in Europe called Or Nué which was again mainly used on vestments. This technique involved couching the gold down in pairs, fully covering the design that had been drawn onto the background fabric. The design lines and shading details were then achieved by changing the colour and the distance apart of the couching stitches. Depending on the design the couching stitches would often sit next to each other, covering the gold entirely. As you can imagine this was a very time consuming technique.

Sure enough gold embroidery spread out of the church and onto the ceremonial robes of the monarchy and military, reflecting their status and power. Many gold embroidery pieces have sadly not survived over the years, as to produce such embroidery came at an extremely high cost, especially for the materials. Often the gold threads were re-used or melted down for money.

Goldwork embroidery today continues to be used widely across the military, adorning dress uniforms, banners crests and badges. It is also increasing in popularity throughout the fashion world, with designers such as Dolce & Gabbana showcasing exactly what can be achieved with this beautiful technique. I will be including a whole chapter on the technique in my upcoming book on fashion embroidery, showing you how to incorporate this fabulous technique onto your own garments.

If you want to have a go at this technique then you can grab one of my kits that show you the basics of goldwork, or signup to my newsletter to hear about the new goldwork kit release coming soon.