No style of embroidery is ever solely distinctive of one time in history or one century. Through evolution of design, there is always a correlation between styles that results in gradual changes of taste and a combination of influences. Designs are very rarely original, instead they have been developed from previous examples, where the best parts have been utilised and the undesirable parts eliminated.

Below you can see my first ever attempt at Crewel embroidery on the Royal School of Needlework apprenticeship. 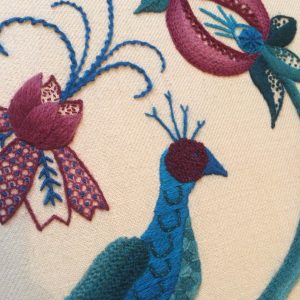 The oldest surviving and probably most famous known example of Crewelwork is the Bayeux Tapestry, which tells the story of the Norman Conquest. Laid stitches were used for the main characters, couching for the outlines and stem stitch for the details. Unlike the name suggests The Bayeux Tapestry is indeed not a tapestry at all, rather an embroidery.

Jacobean Crewel work was the outcome of earlier wool embroidery that even during the highly popular times of opulent Ecclesiastical embroidery, continued to be worked and admired. During the sixteenth and early seventeenth centuries, large grand houses were being built which increased the demand for furnishing textiles such as cushions, wall hangings, curtains, fire screens and bed hangings which were decorated with Crewel embroidery.

In 1600 the East India Company was founded and was formed to pursue trade with the East Indies. It was in the eighteenth century that the company interests turned from trade to territory. The merchants on their expeditions brought back to England, brilliant coloured textiles which depicted the tree of life design along with exotic birds and animals.

It was when King James I came to reign in the early seventeenth century that Jacobean started to gain popularity. In the earliest examples the hillocks were broken up into smaller sections (more like the mounds in the painted Palampores) than in later examples. Around the 1650’s, as with everything else, designs became more exuberant, colour more brilliant due to the further development of dyes and the exquisite stitching began to give way to solid fillings combined with tendrils that filled space between the larger leaves and flowers. The large leaves were rarely angular, instead they swept in curves with the points curled over to show the underside of the leaf, allowing  a wider arrangement of the stitches.

Long and short was used for large branches and leaves. Satin stitch was used for a variety of flowers or small foliage. Buttonhole, also widely used for leaves gave a lighter filling. With rope stitch, coral stitch and chain stitch being used for outlines.

Colours used were rich blues, shading from the darkest indigo to a soft blue-grey which were paired with pale and silvery greens and a subtle use of an accent colour in rose pink, bronze greens or browns.

During the reign of Queen Anne, taste returned to the the older, lighter designs and the bold shapes and colours gave way to a softer modified design. In the Georgian copies, heaviness returned. However, eventually the designs fell out of favour, making way for more fashionable embroidery techniques of the time.

Today, modern Jacobean Crewelwork is generally worked in a 2-ply Appletons Wool on a Linen Twill. Designs are still often based on the tree of life and include floral motifs, animals, birds and insects. Usually a limited colour palette of two main colours is used while adding a minimal amount of a third colour that makes the design pop and bring it to life. Modern Crewelwork also uses a wide range of surface stitches such as, Trellis, Satin stitch, Block shading, Raised stem stitch, chain stitch, laid work, heavy chain stitch, long and short among many more others. 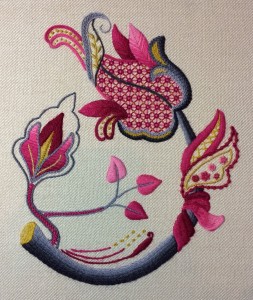 A Brief History of Goldwork