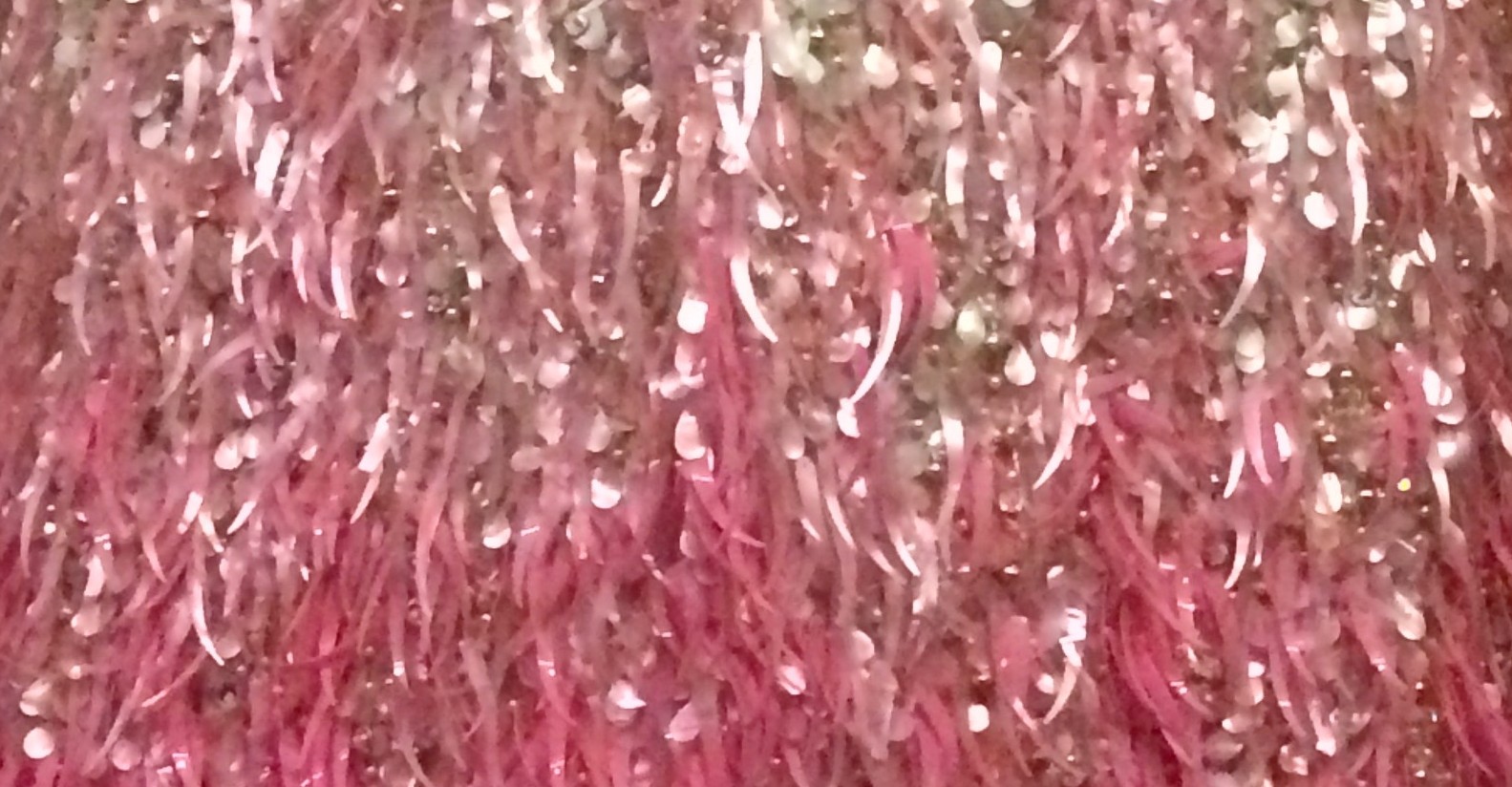 This new exhibition at the V&A examines the life and works of the Basque couturier, Cristobal Balenciaga and the influences he still has over current designers today. On display until February 2018, it is well worth a visit if you can make it into London.

Balenciaga was born on 1895 in Getaria, a small fishing village in the Basque region of Spain. His Mother was a seamstress working for many of the most stylish and glamorous women in the village and it was from her that he developed his love and interest in fashion. At the age of just 12, Balenciaga started an apprenticeship at a tailor’s in the neighbouring fashionable resort of San Sebastian. It was here that he established his first fashion house, Eisa – a shortening of his mother’s maiden name.

In the example below you can see details of small pink ribbon embroidered flowers with the addition of bead and lace. This example is from a wrap front dress with inbuilt corsetry.

After his first fashion house was established Balenciaga went on to open fashion houses in Barcelona and Madrid. In 1937 he moved to Paris and established himself as one of the most expensive and exclusive couturiers. His early education in tailoring set him apart from the others of that time and he knew is craft inside and out. Balenciaga unusually was involved with every stage of the  design and production process. Generally designers will start the designing process by putting pen to paper and sketching out their designs, Balenciaga on the other hand started his design process with the fabric, manipulating and draping to create the effect he wanted. Balenciaga’s dramatic colour combinations and textural effects often attracted attention. In the late 1930’s and after the second World War he was designing smart tailored suits with square shoulders and nipped-in waists, similar in style to his contemporaries (Dior, Chanel), as were his full skirted evening dresses. Balenciaga’s collections evolved slowly after the war, with small details like the shoulder line relaxing and the hemlines lengthening. Dior on the other hand used strong corsetry to mould women’s bodies into unusual geometric shapes and the collections changed quite dramatically from season to season.

Balenciaga’s Spanish heritage played an integral part in many of his early designs, such as this bolero jacket seen below. The traditionally masculine matador jacket has been re-styled and embellished with applied black silk velvet in heart shapes and beads for women to wear over an evening dress.

Fabrics where of great importance to Balenciaga, he put a great deal of time and consideration into choosing the perfect selection. For his Paris shows, fabric was sourced from wholesalers in Paris and from manufacturers in France, Italy, Switzerland and the UK. One of his most significant relationships was with Abraham Textiles who produced seasonal collections in different prints, fibres, weaves and colour combinations. As an influential client he was sometimes guaranteed the exclusive use of a design.

The coat below is worked in organza that has been dip dyed pink. Layers of stitching, tamboured vermicelli pearls then teardrop and feather shaped  sequins  were all layered on top of each other. To finish off, large pearls and Swarovski crystals were added. Worn by Baroness Phillippe de Rothschild with pink taffeta trousers that tapered at the ankle. I love the ombre effect that has been created and the way in which the layers have been built up to create a richly encrusted coat.

In the 1950’s Balenciaga took a more radical approach to his designs with his ‘balloon hem’ dresses, which were often meet with hostility. He used pioneering construction methods whereby large volumes of fabric were supported by hoops and drawn from the front towards the centre back seam. As the wearer would walk, the bagged out skirts filled with air creating a balloon like effect.

During the 1950’s and 60’s, Balenciaga dressed some of the worlds most glamorous women such as Ava Gardener and fashion icon Gloria Guinness, women with a strong sense of style. He built up a loyal following and when the fashion house closed in 1968 the news shocked his clientele and there was a great sense of loss among them. Four years later Balenciaga passed away, marking the end of an era.

Rather than using just conventional floral motifs, this dress is thought to be inspired by the religious imagery of Christ’s crown of thorns. A floral motif is surrounded by almost a barbed wire design. I have taken the embroidery on this dress as inspiration for a stumpwork and metalwork brooch from which I will be teaching a class at the V&A. The kits for this class are available to buy in my shop.

In 1986 the Balenciaga label re-launched under a series of Creative Directors. Nicholas Ghesquiere who revived the label from 1997 to 2012 and Demna Gvasalia who ensures the label is still current today are two of the most note worthy. Both designers have worked closely with the Balenciaga archives, focusing on cut, shape and materials to make sure that his legacy lives on.

Upstairs is a selection of work by various designers who have all been inspired by Balenciaga in some way, whether that be cut, fit or embellishment.

Hubert de Givenchy and Balenciaga became great friends after meeting in 1953. Balenciaga became Givenchy’s mentor and he took him under his wing, teaching him the importance of treating his clients well and keeping his work honest. Balenciaga even financially supported Givenchy when he opened up his own fashion house across the road.

This is just a very small glimpse into what is a wonderful exhibition. There are many more pieces to see and if you have already been I would love to hear what your favourite pieces are?