It all began on a cold winter’s morning. As my alarm went off at 6.30, I rubbed my bleary eyes and realised the day was finally here. The day I get to go to the Dior exhibition at the V&A museum. I jumped out of bed like a kid at Christmas and began to get ready. When I arrived, there was a queue outside the museum. Tickets are currently all sold out but they are releasing a small number each day that you can queue up to get. Luckily I was going with a couple of friends who are members so we got to walk straight in.

In 1947 Christian Dior’s first ever iconic ‘New Look’ collection became an overnight sensation and defined a new era of fashion. One that Dior coined the ‘golden age’. At a time when fabric was still on ration in Britain, Dior went over the top with huge circle skirts, tight bodices and tiny wasp-waists. One of the skirts in his first collection was made using over 80 yards fabric. When Dior was questioned about the indulgent use of fabric in his pieces he responded to his critics with “I am giving women the dresses they want. They’re fed up with war restrictions……. Full skirts are a release.”

Christian Dior fell in love with Britain on his first ever visit in 1926, when he was granted permission by his parents to spend three months over here perfecting his English. Dior had a romantic view of British society and was particularly taken with the English aristocracy. He loved to dress the English debutantes and the young Princess Margaret. His first British show at London’s Savoy Hotel in 1950 would become the start of a great relationship with Britain. C.D Models (London) LTD was formed in partnership with Dior in 1952 which produced ready-to-wear versions of his haute couture garments using British products and collaborating with other British manufacturers, such as Symington’s corsets and Dent’s gloves. At the end of 1954 the London business was renamed Christian Dior LTD and reorganised so as to be run by representatives from Paris.

In 1957 Christian Dior died of a heart attack. Over the 10 year span, Dior designed 22 collections made up of over 90 different looks. After Dior’s death, the young Yves Saint Laurent, who had trained underneath Dior took the reigns and continued to steer the house of Dior to great success.

Below is a close up image the coat dress from John Galliano Spring/Summer 2005 collection. The background fabric is a silk satin. The embroidery includes applied feathers with clusters of Swarovski crystals in the centre of the feathers. A gilt braid has been applied to create the scalloped effect. The leaves have been worked in satin stitch and silk shading.

This dress was part of the Haute couture Autumn/winter 1953 collection, design by Christian Dior. Gilt thread embroidery creates the outlines of the flower and leaf shapes which has then been filled with clusters of beads and sequins. The fabric is a silk satin. 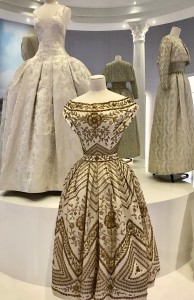 Christian Dior loved to travel as a young man and influences from other cultures can be seen throughout his designs. He was inspired by architecture, landscapes art and textiles from different cities. Dior’s successors continued to use these inspirations in their own designs for Dior, interpreting them in their own, unique way as can be seen in the dress below. Designed by John Galliano for the Haute couture Spring/Summer collection in 1997 he was inspired by shawls from China which often show elaborate embroidery in typical motifs such as peonies and butterflies along with the long decorative, knotted tassels. The dress shows such beautiful draping, creating a sleek silhouette. 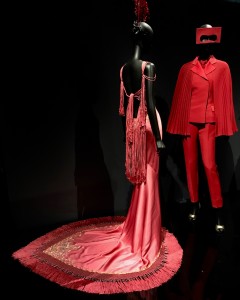 From early childhood Dior loved to spend time in the garden that his mother, Madeleine had created. This enjoyment of gardens continued into his adult life and he would often enjoy sketching his designs surround by the nature of his own gardens. His New Look designs were inspired by the shape of an inverted flower and the Dior salons were decorated with large floral arrangements. Maria Grazia Chiuri’s Haute Couture Spring/Summer 2017 dress as seen below used cut and dyed feathers applied to silk tulle. The feathers were positioned in such a way so as to create the look of delicate flowers. In tribute to Dior’s love of the garden, Maria Grazia Chiuri showed her first couture collection in the garden of the Musee Rodin. Models glided through a magical secret garden, complete with moss-covered floor and boxwood hedging. 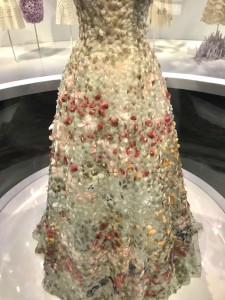 The final room in this exhibition is the Ballroom. This room celebrates the grandeur and extravagance of Dior’s iconic designs. These dresses were Dior’s opportunity to show off the skilful draping and intricate embroidery and embellishments, whilst creating theatrical, one of a kind, exquisite gowns. This was without a doubt my favourite room in the exhibition. Below you can see delicate soft pink dresses adorned with Swarovski crystals, feathers and beads, all painstakingly hand stitched on. 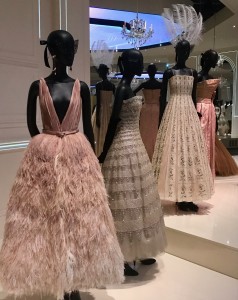 I hope you have enjoyed this little post on the Dior exhibition and it has encouraged you to make a trip of your own to see it. The photos shown here do not do the pieces justice and if like me as a little girl, you dreamed of just being able to see in real life glimpses of these stunning creations then you will not be disappointed. It truly is a stunningly curated exhibition.

I know I shall certainly be making another visit to this exhibition and it has given me plenty of inspiration for my book I am currently writing on fashion embroidery.